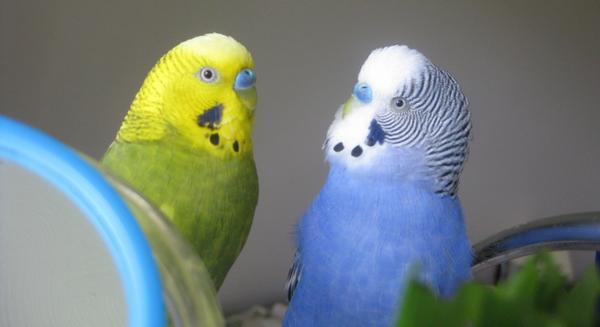 The great thing is that you can’t fool a pet into feeling better. This story comes from our customer who still faithfully uses her Zappicator with her birds. If you have a pet story, we would love to share it too.

Arlene’s magic touch zappicating her birds helped them live on and on, surprising us all. Arlene felt it was not the length of their days that mattered as much as their quality of life. I don’t think you will find anyone out there who loves budgie birds as much Arlene!!

Arlene sent us a picture of her budgies, the blue bird above is Henry. Here is my interview with her about her budgies.

Me: “Arlene, I call you the bird whisperer. because you have an amazing understanding and love of birds. How long have you been a budgie bird lover?

Me: How many budgie birds have you had?

Arlene: I’m going to say anywhere between 12-14. Josephine was my very first bird, and she lived to be 8 years old. Then I had a bird named Sam and he lived 16 years. Maybe I haven’t had that many birds, but it’s gone on and on. I had a bird and he ate off my food plate. I had Henry and Mar, and Henry’s wing was droopy. I was concerned about losing him.  His wing was drooping down. I thought “I’ve got nothing to lose but zap the bird”

Arlene: I put the zappicator at the bottom of the cage and then put some paper down. That’s what we did.

Me: What did you see? What happened?

Arlene: It seemed as if his wing was getting better, and it wasn’t as droopy as time went on. It lifted up, though it was saggy. But they were energetic birds too. I think it gave them more energy. My son would call them the fearless budgies.

I put the zappicator at the bottom of the birdcage, and then put the paper towel down. I think it was just for the 15 minutes. The birds were in the cage. That would happen in the morning before I would let them out. And I would do it in the evening as well.

Me: And you did that when the birds were sick?

Me. What other things did you do for the birds? You used to feed them certain things.

Arlene: Lots and lots and lots of lettuce. Lettuce every day. Organic lettuce. Before the organic thing got to be the biggest thing on the market. They are tiny birds and you can’t risk the fact of having pesticides. But my birds have had lots of lettuce, lots of celery, it is major for them, and parsley, lots of parsley. It’s so inexpensive. You put a big bunch on their cage wet. They rub their little feathers in it and then they eat it. That’s what they do. They love to be wet. They love vegetables. They love fruit, apples.

Me: Hulda Clark says parsley is good for people, and it’s good as part of the kidney cleanse.

February 16th, 2021 Arlene noticed that her new bird Roy was puffed up, experiencing diarrhea (not formed poops), and was putting his head into his back (twisting his head to nestle into his back). He wanted to be left alone, isolating himself from the other birds. All of these symptoms showed that Roy was cold, body in distress, and unwell.

She wrapped him in a blanket and took him to the vet, who heard congestion in his breathing. She said he had pneumonia, administered an antibiotic, but said that this bird was unlikely to survive. Arlene took him home, placed a heating pad above the cage, and set up a zappicator underneath the cage. She turned on the zappicator for 15 minute cycles as often as she walked past the cage, and even in the night. She fed him the antibiotic, and spent time with him and slept with him on her chest. Roy began to eat, his poops began to be formed, and he made a comeback. Arlene fed him a diet of lettuce, celery, carrot, apple, and parsley. After a 10 days he joined the other birds, and is doing amazingly well today.

We would love to hear about your experiences with Hulda Clark’s method applied to your pets. If you have something to share, please send a message to help@BestZapper.com

The easiest way to help your pet with the Hulda Clark Zappicator is to do what Arlene did above.  The pet isn’t aware or troubled, and the magnetic box is easy to cover with a plastic bag and keep clean. Place it under the pet bed, set the zappicator cycle to a 15-minute green flashing cycle, and let your pet sleep through the entire thing.

See our demo video here. You can also use the zapper and the silicone pet pads directly on your other pets.